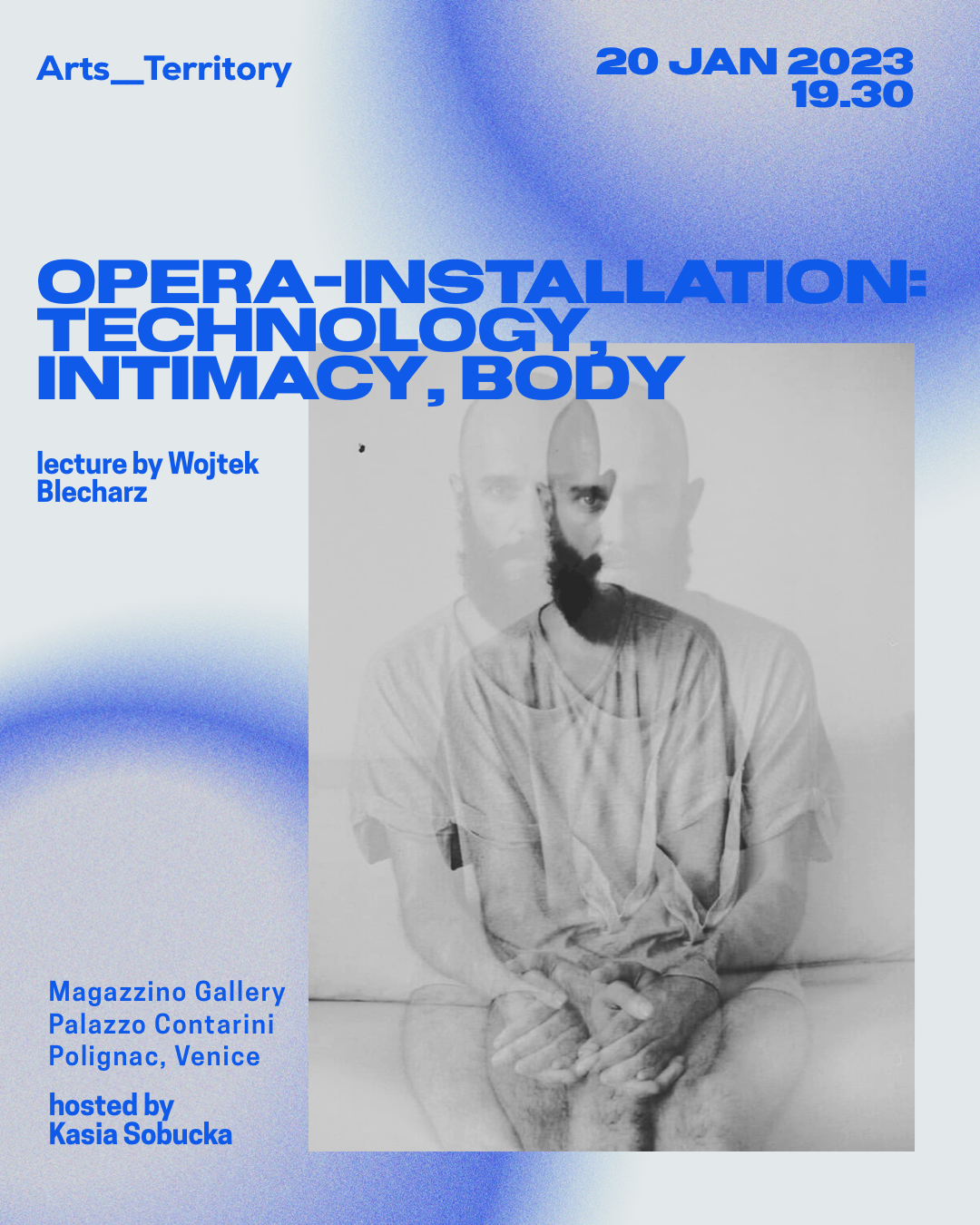 Our current artist in residence Wojtek Blecharz reflects on the development of his concept of the opera-installation. The lecture will include opportunities to experience Wojtek’s three immersive operas, and learn about his process and vision of the future of the operatic format.The presentation will be followed by Q+A and drinks reception.

The event is hosted by Kasia Sobucka

Opera-installation in a nutshell; What happens if we look back to the beginning of the opera and try to recombine different fields of arts such as installation art, performative arts, and technology? What happens if we look at the very meaning of the word “opera”, which in Italian means “work” and understand it as work with sound, work about sound, work through sound…? Finally, what happens if we go back to the very origins of the genre and see opera not as an exclusive, prestigious event, but more as a social gathering, where people come to spend time together, participate and be in sound?

Those 3 aspects became the basis for my understanding of the opera-installation, which is a work on sound that must be installed in a specific space and includes a more participatory role of the audience. The inspiration taken from the installation art opens opera-installation to a different type of non-linear narrative, and treats the libretto in a conceptual, relational and intertextual way: not as a story, but as a concept that is “worked through sound”.

In Transcryptum commissioned by Grand Theater National Opera in Warsaw, 250 viewers, divided into 5 groups explore vast off-stage spaces of the opera house encountering various objects, installations, and fragments of music. The walk represents the nonlinear structure of a traumatic memory and the viewer, who is placed inside this structure, is supposed to reintegrate bits and pieces into a coherent narrative.

Park-Opera commissioned by Theater Powszechny offers a sound walk through one of the parks in Warsaw, where different attributes of an operatic work can be found along the walk: overture for orchestra by the lake, choir of wireless speakers hanging on the trees or a group of “ballet dancers” made of local joggers who meet at the park to run together. The libretto for Park-Opera is the soundscape of the park itself and the ways how we tune our ears to the environment and listen to each other.

The third opera-installation Body-Opera, commissioned by Huddersfield Contemporary Music Festival addresses the issues of senses in relation to the physicality of sound, but also refers to how cultural institutions are limiting listener’s perception by cultivating the same models of experiencing music based on sitting, listening and watching. Body-Opera is composed of 100 transducer speakers, which are hidden in pillows, and arranged on 100 mats on which the audience shall sit or lie down during the performance. Transducer speakers not only project sound, but also vibrate with specific frequencies, thus it allows feeling the sound in a very immersive way. The participant can watch, nap, sit, lay down, and listen to the music, but also literally “massage” with the sound through the transducer speakers.

Wojtek Blecharz - a pioneer in the realms of merging music, technology and site-specific installations; Wojtek is one of today's most sought-after composers. His opera-installations create a multi-sensory performance, immersing the listener fully in the music. Born in Gdynia (Poland) in 1981, he graduated with honours from Frederic Chopin Music Academy in Warsaw in 2015 and received a PhD in music composition at the University of California San Diego. His work has been performed at the Grand Theatre National Opera in Warsaw, the Huddersfield Contemporary Music Festival, the Salzburg Biennale, the Museum of Modern Art in Tel Aviv, Bendigo International Festival of Exploratory Music (Australia), MATA Festival (New York), Mostly Mozart Festival (New York), Klangwerkstadt (Berlin), Hamburger Bahnhof, and others. He composed pieces for the Forbidden City Chamber Orchestra (Beijing), Klangforum Wien (Vienna), Royal String Quartet (Warsaw), Aviva Endean (Melbourne), International Contemporary Ensemble (New York), Musiques Nouvelles (Brussels) amongst others. He received many awards and nominations including IMPLUS International Composition Competition in Graz and the Passport Award for classical music of the Polityka weekly. In 2015 a theatre/choir piece with Blecharz’s music Mutter Courage und ihre Hunden directed by Marta Górnicka, and commissioned by Staadtstheater Bruswick was acclaimed as one of the best 60 performances in Germany. Since 2012 he has been curating the Instalakcje music festival at Warsaw’s Nowy Theatre, featuring non-concert music.

Arts Territory: Venice is a residency programme that offers time and space for independent research, reflection, and experimentation. The programme is timed for the pandemic/post-pandemic era, experimenting with alternative and nascent models of an artistic residency that values hospitality, care, and openness. Its fluid form reiterates and reconstitutes itself to adapt to emerging ideas and circumstances. Its open structure allows ideas to unfold through meaningful connections as well as conversations with partners and artists.