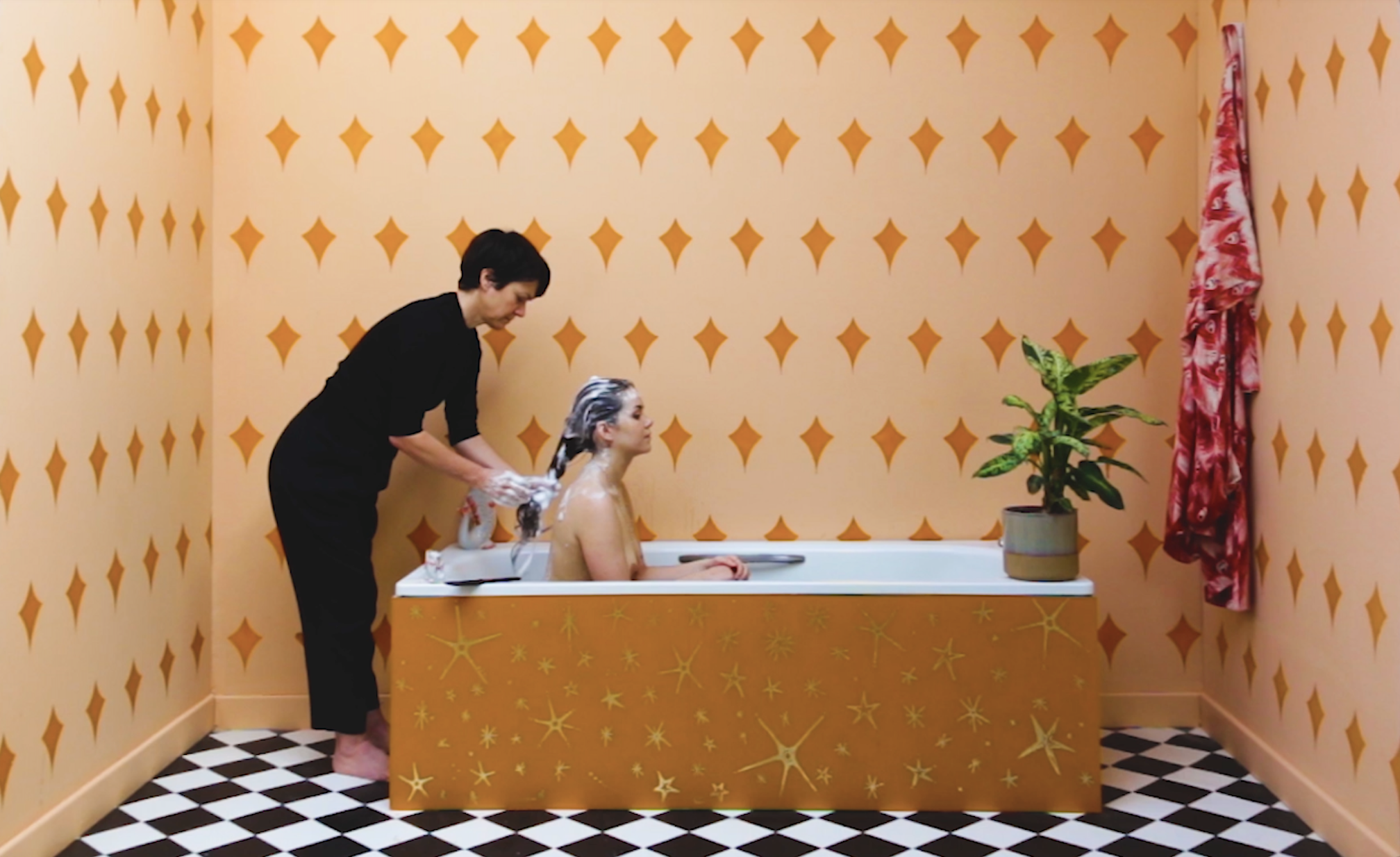 Maxima Smith, Portrait of the artist as a Daughter, 2018, video still

The screening programme Invisible Goddess brings together works by five women artists and filmmakers. Goddess, as an emblem of power free to exist beyond the narrow limits of society, initiates a conversation on the invisibility of emotional labour.

Each story explores feminine spirit, love, fertility, labour, nature and myth, and often uses the female body as a vessel to do so. Working at the intersection of art, feminism and cinema, Invisible Goddess gives voice to women artists. Addresses their rights and identities, visible in their work and beyond. Artists look at identity, empathy and solidarity as tools for the individual and collective agency in an ever more unsettled world. By evoking the paradox of the goddess as a plentiful, fertile, and giving deity that can be found within most spiritual narratives, we question the current expectation of gendered labour, which is often founded on such archetypes. What do we strive for in our depiction of femininity, and how has a historic confirmation bias created a causality loop from which it is seemingly impossible for contemporary feminist thought to escape.

Lyrical wonder, a variety of selves, spirituality and ancient figures meet with modern-day landscapes in this intimate screening that includes: School Reading by Aleksandra Karpowicz, Broken Hearts Hotel by Katarzyna Perlak, Down the River by Lena Maria Thüring, Portrait of the artist as a Daughter by Maxima Smith and Marry, Fuck, Kill by Ruth Patir, alongside performances and discussions with the artists.

School Reading is a direct response to Poland’s restrictions on sexual health education and abortion rights. Drawing parallels to her personal experience of a childhood in a conservative Catholic country, Karpowicz exposes flaws in her native country as well as comments on the damaging effects of ideology-driven education on the younger generation.

Broken Hearts Hotel explores the potential of the "love hotel" as a temporary, utopian non-space in which we can reinvent love, relationships and ourselves, and holds tender correspondences filled with love, longing, desire, sorrow and heartbreak. Broken Hearts Hotel was premiered at a public online screening and conversation with critic, art historian and curator Pawel Leszkowicz, which followed two days of one-on-one virtual encounters with the artist, during which participants could choose to overshare broken heart histories, take an intimacy quiz, dance across the screen, or listen to a bedtime love story read just for them.

Down the River by Lena Maria Thüring, 2022

Thüring has created a multi-layered multimedia work based on the artist's research into the contemporary mechanisms of marginalization of women* and the Bergell witch trials of the 16th to 18th centuries. In Down the River, image and sound levels are interwoven in collaboration with the Bergell choir to create an essayistic film that also addresses questions of possible empowerment.

Portrait of the artist as a Daughter by Maxima Smith, 2018

Portrait of the Artist as a Daughter, begins in a picturesque bathroom, as you watch a mother wash her daughter’s hair in silence. As the film goes on the camera gently zooms out to reveal it is a set. The illusion is shattered, it becomes a stage and the women are performing their roles. This piece oscillates between two spaces: an intimate moment and a staged performance.

Petah Tikva is a 3D video work set inside the waiting room of the fertility clinic at the hospital of the city of Petach Tikvah. Here, 3000-year-old figurines of Canaanite fertility deities fill the room waiting for their allotted appointments. As the deities wait their turn in the clinic and ponder their discharge, TV screens broadcast the news: wild animals - also Canaanite figurines digitally animated – are invading urban spaces or major cities. Through the animation of these figurines, which are part of the Archaeology Wing or the Israel Museum, Jerusalem. Patir creates a poignant mediation on the various forms of invasion we experience in contemporary reality.

Aleksandra Karpowicz is an award-winning artist based in London, working with video, photography, and performance. In her art she explores themes of relationship to body, psychology, sexuality, and identity, and how those aspects of human nature are expressed and oppressed in our society and politics. A great diversity of over 600 people from a range of social backgrounds, genders, sexuality, and ages appear in her work. She often performs and models for her own art, exposing struggles and personal journeys of healing. She sees her art as an empowering platform of expression for herself and the communities she works with.

Katarzyna Perlak is a Polish born artist, based in London who works in moving image, performance, sound, textiles and installation. Her work is driven by politics and feelings examining queer subjectivities, migration and the potentiality of affect as a tool for registering and archiving both present, continuous and past historical moments. Her background is in Philosophy, which she studied in Poland, and Fine Art Media which she studied at Camberwell College of Arts (2008) and Slade School of Fine Art (2017). Her films have been shown widely at film festivals across Europe and she was part of Bloomberg New Contemporaries in 2017. She has exhibited internationally, including: Young Curators New Ideas V, Detroit Art Week, Detroit; I was, but just awake, Art Night, London (2019); Tighten Throat and Butterflies, Metal, Liverpool Biennial, Liverpool (2018); A Day of Learning, Diaspora Pavilion, 57th Venice Biennale, Venice (2017) and  Remote Intimacies, Leslie – Lohman Museum of Arts, New York & ONE Archives, Los Angeles, (2021).

This project is supported by Adam Mickiewicz Institute