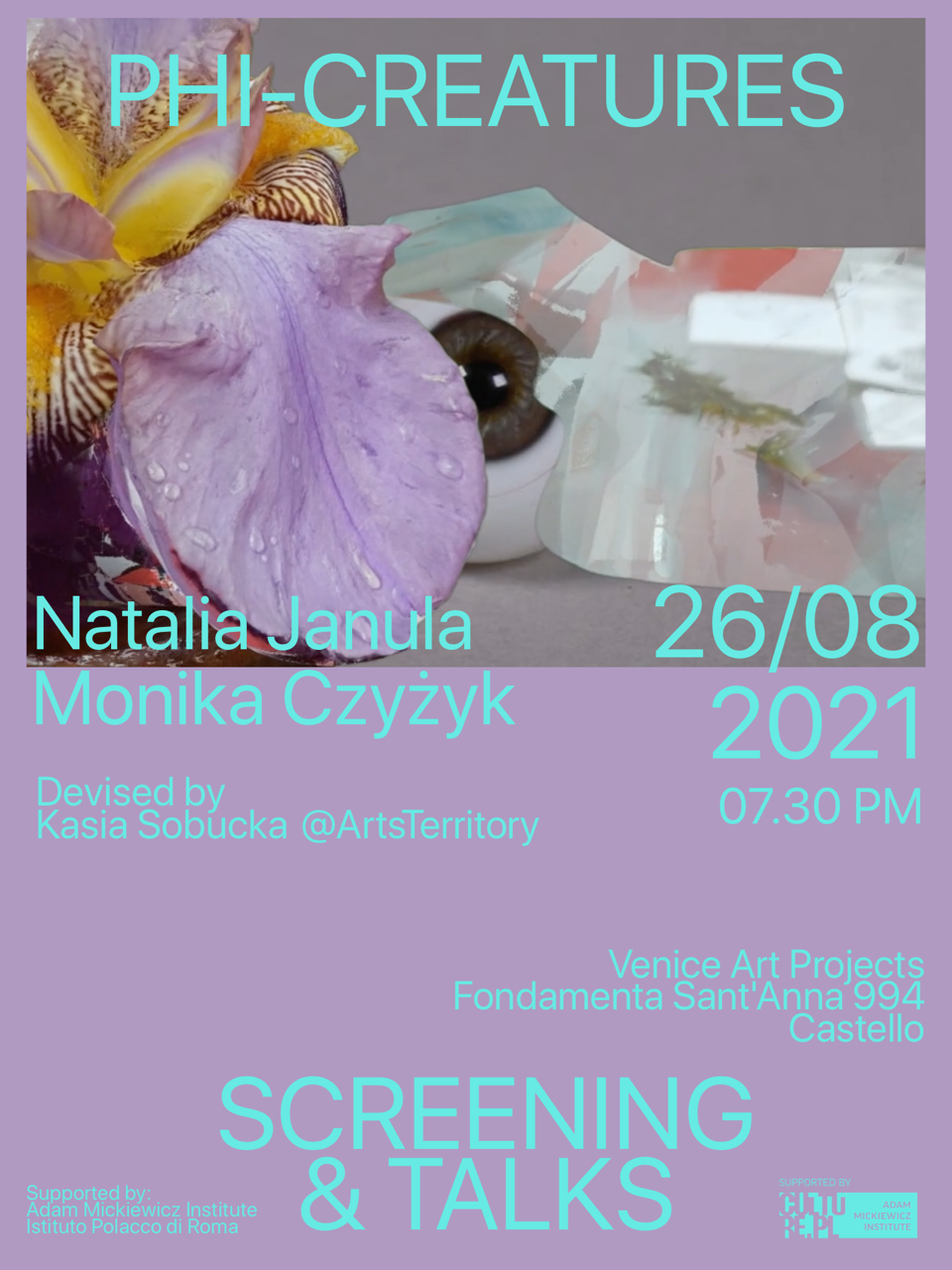 PHI-CREATURES
Screening & Talks by Natalia Janula and Monika Czyżyk
.
.
26 August 2021 at 7.30pm
Venice Art Projects
Fondamenta Sant'Anna 994, Castello
.
.
PROGRAMME :
MONIKA CZYŻYK (PL/FI)
BOdyssey: Prologue, 2016-2017, (22 min)
https://www.monikaczyzyk.org
.
NATALIA JANULA (PL/UK)
what is your hemocyanin level, 2020 (4.15 min)
play it by rhizome, 2020, (3.13 min)
iris, an eye under the sun, 2020, (3.12 min)
Mutables, 2018, (4.39 min)
https://nataliajanula.com
.
Phi-creatures or visitors refer to beings shaped by the planet-wide ocean from suppressed desires in the human unconscious. They appear in Solaris – Stanisław Lem’s symbolic novel speaking of self-understanding attained through human-‘alien’ contact. Solaris tells the story of a scientist who travels to the planet Solaris to continue attempts to communicate with the planet’s sole native inhabitant: a vast, sentient body of plasma-like substance which takes up Solaris’ surface – the thinking ocean.
The result presents human-like, gender-suggestive metaphoric figures, including the replica of a woman, shaped by the oceans psychoanalytic study of the unconscious mind of the main protagonist, his deepest fears, longings and dreams.
Both Natalia and Monika work with speculative narratives, the enigmatic embodiment of a constructed "feminine", gender, hybrid protagonist, humanoid forms, mythological symbolism, hydrofeminism, rituals and myths related to the female body and sci-fi imagery.
.
Curated by Kasia Sobucka
Part of Arts Territory Venice residency programme.
.
.
Monika Czyżyk is a visual artist and filmmaker primarily working with moving image in the context of experimental documentaries and socially engaged projects.  She works nomadically in local contexts, manifesting collaboration-based performances that she combines with recorded experiences to create her films and installations. She lives and works in Helsinki, Finland. In 2020/2021 Czyżyk received a grant from the Kone Foundation and Arts Promotion Centre Finland. She is a current artist in residence at Amant Foundation, Italy.
.
BOdyssey: Prologue, is an experimental film that features global female participants and asks them to speculate on a variety of subjects including 21st-century feminism, politics, family, media art, technology and the advancement of a post-human kind. The device at the center of the video collaboration is a toy camera: the Videogirl. Videogirl is a 2010 special edition Barbie doll with a video camera and playback unit embedded in its body. The film intends to build upon the role of re-imagined female characters in Stanley Kubrick’s 2001: A Space Odyssey. This seminal work constitutes the stepping stone for Astronaut Barbie’s quest into the future of the human species. During filming Monika had the chance to meet fascinating women, either professional filmmakers or everyday heroines, of diverse cultural origins and unusual perspectives on life. I have invited them to participate in the project by providing them with their own Video Girl and the request to film their unique viewpoints, stories and personal perspectives of the times we are living in.
.
.
Natalia Janula is an artist working across video, installation, CGI, performance sculpture, kinetics and sound. Rooted in an interest in speculative narratives, her practice examines the natural environment, the concept of functionality and the exploration of the body’s positioning within synthetic surroundings, often with an element of levity. The resulting works emerge from research into phenomenology, material thinking, ethnography, mythological symbolism, hydrofeminism, anatomy, medicine and rituals around female and hybrid protagonists. Her material vocabulary includes silicone, resin, jesmonite, 3D prints in sandstone, ceramics and found objects. Parts salvaged from old, discarded electronics; items found during mudlarking sessions and cheap consumer household items – are re-purposed, re-cast and re-worked to become wearable props for performance or Ikebana inspired assemblages. These assets are digitized and recycled with analogue materials into mixed reality short films. She recently completed her newest short mixed reality visual poem titled ‘Iris, an eye under the sun’ in collaboration with Anna Souter, an independent writer, editor and curator with an interest in contemporary art and ecology, and David Williams, a sound and a computational artist.
.
what is your hemocyanin level, 2020 (4.15 min) reflects on a relationship between humans and a creature which has been treated until very recently as a living natural resource - Limulus polyphemusthe. The film provides a speculative voice for our protagonist - the horseshoe crabs who amongst an affectionate conversation with their 'partner' also questions its human captors who only want the precious blood that flows through their body. 'what is your hemocyanin level' floats between several different worlds. We drift from a watery algae-covered landscape to a scientific documentary intertwined with interiors of a victorian glasshouse and hybrid computer-generated creatures. The film is accompanied by an improvised sound poem interspersed with flute phrases that are at once haunting and playful. The crab is imagined as a dancer restrained - who longs only for the freedom and joy of movement in its oceanic habitat, in which the crab'sunique physiology can truly shine.
.
play it by rhizome, 2020, (3.13 min)
flag. bearded. snakes-head.
i have been watching, an eye under the sun.
ir-eyes. i rise. rhizome, i.
root-spreading, many-headed, Medusa’s snakes rising from the earth (she who turns all life to stone in the end)
i live in the rainshowers and the boggy places and i am not afraid of my own reflection
or the globe of clear water that gathers on my petals and contains in its membranes the whole world of your reflected eyes.
male and female, i, bearded beauty winking at insects (shaped together by our partnered desires)
colourful goddess, i, one letter containing singularity and multiplicity (yes, i contains multitudes like you)
my words wrap round the world to embrace the tangled beings who will someday be rock
and underneath all is rock and all the flags and banners and marshalling fleur-de-lys will become rock
and i, also, the flag, iris, in your eyes
and then I rise
rhizome, i.
text and voice - Anna Souter
sound - David Williams
.
play it by rhizome, 2020, (3.13 min) is a mixed reality sequence and component of a series of works currently being exhibited as part of the
‘Urban Antibodies’ show @weekend.athens. The exhibition looks into the identity of the city, imagined here as a mutating, living organism – with fluctuating sites of toxicity and vulnerability, recovery and care.

PIBR is an open-ended proposition - “one will continue to collect bits of irresistible cud for as long as the city keeps spitting them up”, and like the nest of a dysfunctional magpie, Janula’s archive of the unwanted continues to grow and morph. Her objects are transposed, re-cast and re-imagined in a variety of ways. The semiology-continuum is disrupted as their spawn multiply and divide, copies of copies.

A nebulous virtual space is the stage for those which find themselves as fragmented 3d entities, while a series of hybrid objects are arranged as performers in a miniature electro-mechanical circus – whose master, the nomadic urban wanderer, sets them up to perform on the streets of the city.

Mutables, 2018, (4.39 min)
Natalia’s recent video work - Mutables is a layered exploration of moving image which maps the soul-search of a half-woman, half-fish creature - a mermaid in reverse with a fish’s head and a human body. Partly inspired by research into mywater-basedr based female creatures from the Odyssey - ‘Between Aeaea and the rocks of Scylla’ as well as ideas around otherness and inter-connectivity. By merging dualism’s– the digital and analogue, artificial and natural, Mutables floats between several different worlds. We drift from a beach to a semi-urban wilderness, domestic scenes, and hybrid computer/3D scanned object nether-places – following our heroine on her quest to seek her place in this comic cyber-topian drama. The soundtrack further helps us to navigate between scenes like a schizoid music video – ambiance gives way to triumphant synth pop, through to glitch and spacey groove; punctuated in moments by the artists own voice reading from clandestine passages, and a chopped-up disembodied voice which seems to be questioning our safety and/or sanity.  The work doesn’t seek to judge the viewer’s relationship with the natural world or project any ecology-based agendas. There is no guilt or shame, just existence. The character has been designed to be highly relatable – we share in her frustrations. We too, may wish to seek harmony within our environment/s, but find ourselves overwhelmed by the growing complexities of modern living. We also may gesture aggressively while babbling and tapping away on our inanimate machines, seeking meaning through a screen while forgetting our roots to the earth and sea. In Mutables, Janula’s wobbly heroine could be any one of us – and our desperate attempt at ‘Tree Pose’ to restore balance to the lives we suddenly finds ourselves leading.
.
.
Supported by Adam Mickiewicz Institute, Istituto Polacco di Roma. 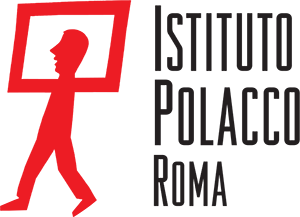