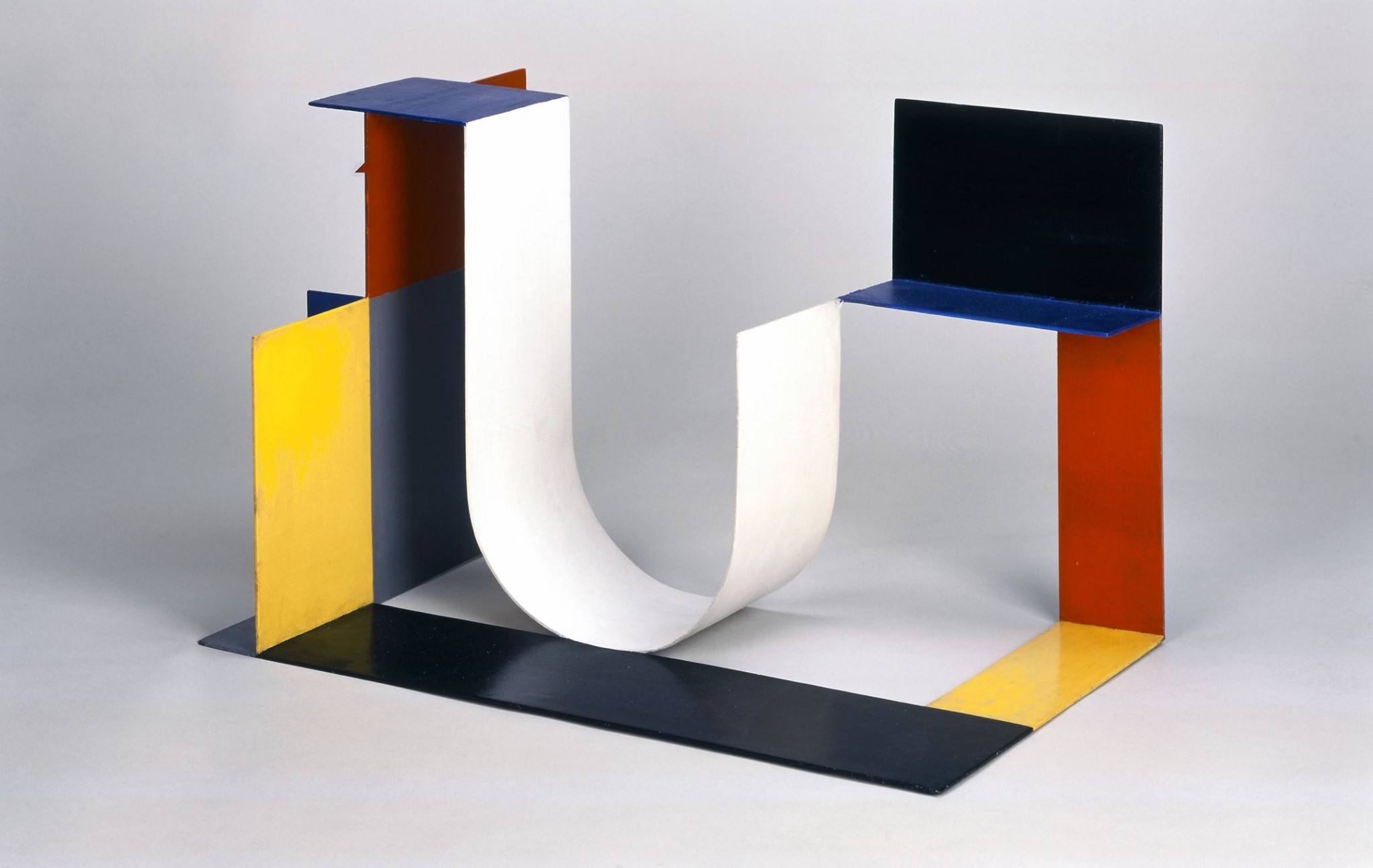 Under JEMP 2019, Vocal Constructivists presented "Three Sound-Sculptures for Choir” by Wojtek Blecharz, based on Katarzyna Kobro's Spatial Composition no 4, 5 and 6. This newly commissioned work transformed four sculptures of the constructivist artist Katarzyna Kobro (1898–1951) into musical compositions. The most significant features of Kobro's Spatial Compositions, such as colour, proportions, ratio etc., were translated by the composer into musical structures and sound actions that were performed/composed by the choir in real time.

Drawing on the ideas of the Polish interwar avant-garde, the performers explored theories of Unism and Functionalism for a site-specific performance in the Swiss Church. The composer Wojtek Blecharz and art curator Kasia Sobucka led the Vocal Constructivists in a live installation influenced by the text Kobro authored with Władysław Strzemiński, Composing Space: Calculating Space-Time Rhythms (1931). Expanding Unism’s four arts (painting, sculpture, architecture, and typography) to include sound and movement, broadens visual art’s ability to achieve unity with the place of its creation. This performance offered 21st-century audiences a way to directly experience the early 20th-century utopian belief in the ability of art to organize life and its functions.

The Polish Constructivists placed great emphasis on geometrical forms and on modern technologies to access ideal spacial harmonies. This performance projected these ideas both literally and metaphorically. Using cutting-edge technology, 3D-scanned images of the sculptures were shown in the performance, with sounding events taking place behind, alongside, and in front of the projections.

Like music, sculpture impacts air molecules with its physical presence, which makes it particularly well suited to a multisensory spatialized interpretation. The Vocal Constructivists articulate not only the external borders of Kobro’s sculptures but also the inside, made accessible to the audience via the projections. The interior connected with the exterior in an open rhythm that began with the sculpture, moved out into the space, and found resonance in the venue. An open rehearsal allowed the public to witness first hand this unprecedented sonic “reading” of sculpture and architecture, ahead of the 15th December performance.

Wojtek Blecharz graduated with honours from the Frederic Chopin Music Academy in Warsaw (Master of Arts) in 2006, and received a PhD in Music Composition at the University of California, San Diego in 2015. Since 2012, Blecharz has been curating the Instalakcje Music Festival at Warsaw’s Nowy Theatre, featuring non-orchestral music: sound installations, performance installations, sound sculptures, music videos and music theatre. Blecharz has also directed both of his opera-installations Transcryptum (2013), commissioned by the Grand Theatre National Opera in Warsaw, and Park-Opera (2016), commissioned by the Powszechny Theatre in Warsaw. He also prepared a third opera installation, Body-Opera, commissioned by the Huddersfield Contemporary Music Festival (premiered in November 2016). In 2012, he received a scholarship prize ‘for perfection in music composition’ at the International Summer Courses for New Music in Darmstadt, and was nominated for the Passport Award for classical music of the Polityka weekly. In 2013, he was selected as one of the winners of the IMPLUS International Composition Competition in Graz., for the PKN Orlen Prize ‘Poles with Verve’ in Art and Culture and to the Polish Radio Channel Three Yearly Award ‘Culture Man of the Year.’ His opera Transcryptum, commissioned by the Grand Theatre National Opera in Warsaw, was nominated as the cultural event of 2013 in Gazeta Wyborcza’s referendum Wdechy. In 2015, the theatre/choir piece with Blecharz’s music—Mutter Courage und ihre Hunden, directed by Marta Górnicka and commissioned by Staadtstheater Bruswick—was acclaimed as one of the best 60 performances in Germany. In 2016, it received a music theatre award for the Best Performance of a Contemporary Play (Warsaw/Wałbrzych). www.wojtekblecharz.com

The Vocal Constructivists, founded in 2011 by musicologist and performer Jane Alden, specialise in the realisation and performance of American, British, and Polish experimental scores. Since their formation in 2011, the group has premiered over 20 new commissions and offered radical new interpretations of older works. They were the first ensemble to give a fully vocal performance of Cornelius Cardew’s 1967 Treatise. Other featured composers include Mark Applebaum, Wojtek Blecharz, Anthony Braxton, Neely Bruce, Jan Duszyński, Wojciech Kosma, Paula Matthusen, Meredith Monk, Pauline Oliveros, Michael Parsons, Tom Phillips, Lauren Redhead, Bogusław Schäffer, Tomasz Sikorski, and Christian Wolff. Their vivid concert presentations result from extensive engagement with composers and with source materials. They have performed at the Arcola Theatre, Café Oto, The Forge, Peckham Multi-Storey Car Park, St John’s Smith Square, South London Gallery, and V22 Summer Club. They were Ensemble-in-Residence for the 2013 Time Stands Still Notation Festival at Wesleyan University (USA), at the 2013 London Contemporary Music Festival, the 2014 Music and Process conference at Christ Church University (Canterbury), the 2015 Stoke Newington Contemporary Music Festival, the 2016 Dublin Ideoprenurial Entrephonics Sound Art Festival, and were the closing act of the Southbank Centre’s 2016 Deep Minimalism Festival at St John’s Smith Square. The Vocal Constructivists gave a series of tribute concerts in memory of Pauline Oliveros in 2017 and 2018. In 2019, they staged Tom Phillips’ 1969 opera Irma at Lumen Church and were the featured ensemble for an event at the British Library to mark the 50th anniversary of the formation of the Scratch Orchestra. Coming from diverse backgrounds, with ages ranging from 18 to 78, the Vocal Constructivists draw on a variety of artistic influences—classical, global, avant-garde, eclectic, and dramatic. Experimentalism is the primary motivation, propelling the group away from an expected sound world. Their CD Walking Still is available on the label Innova (#898). www.vocalconstructivists.com 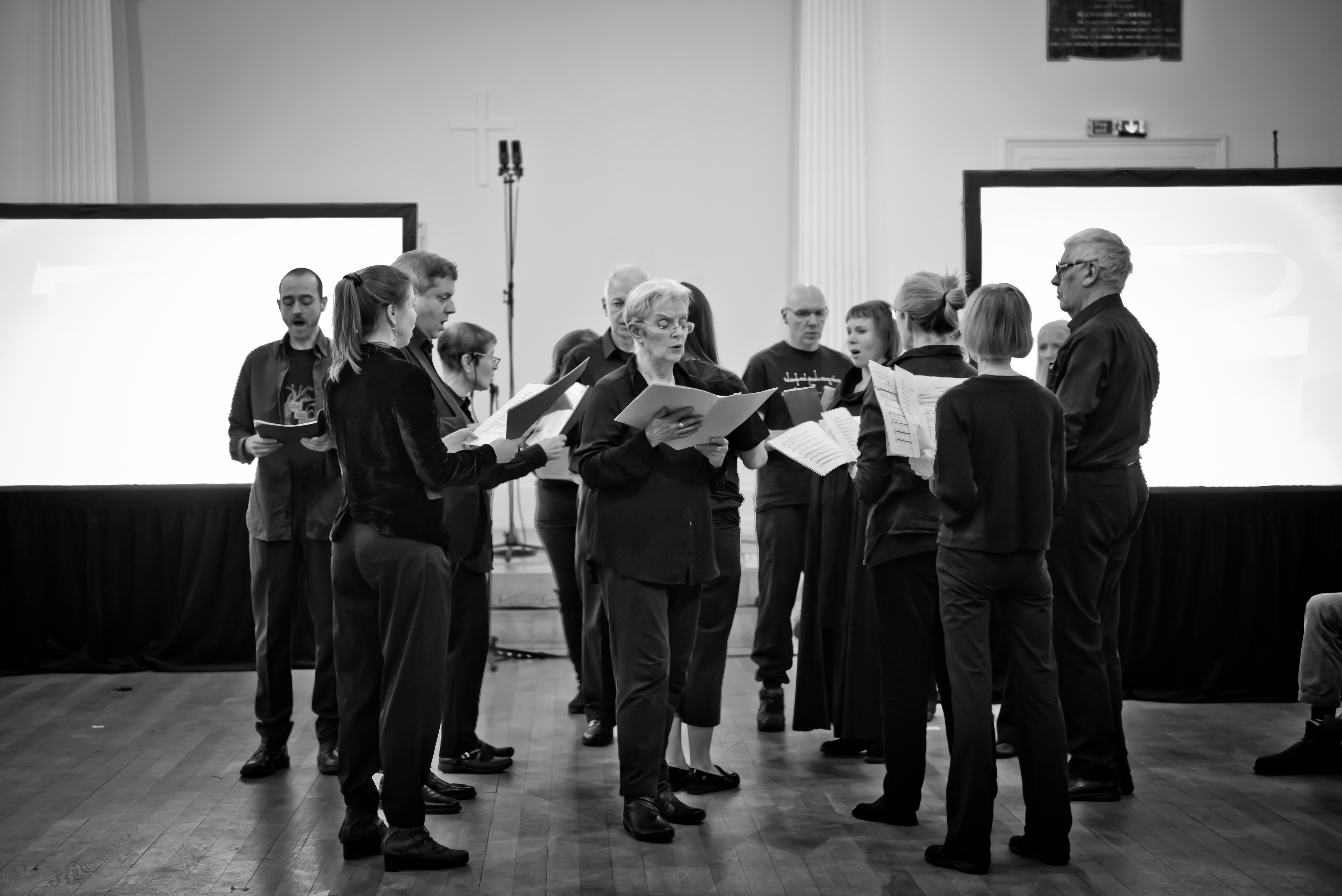 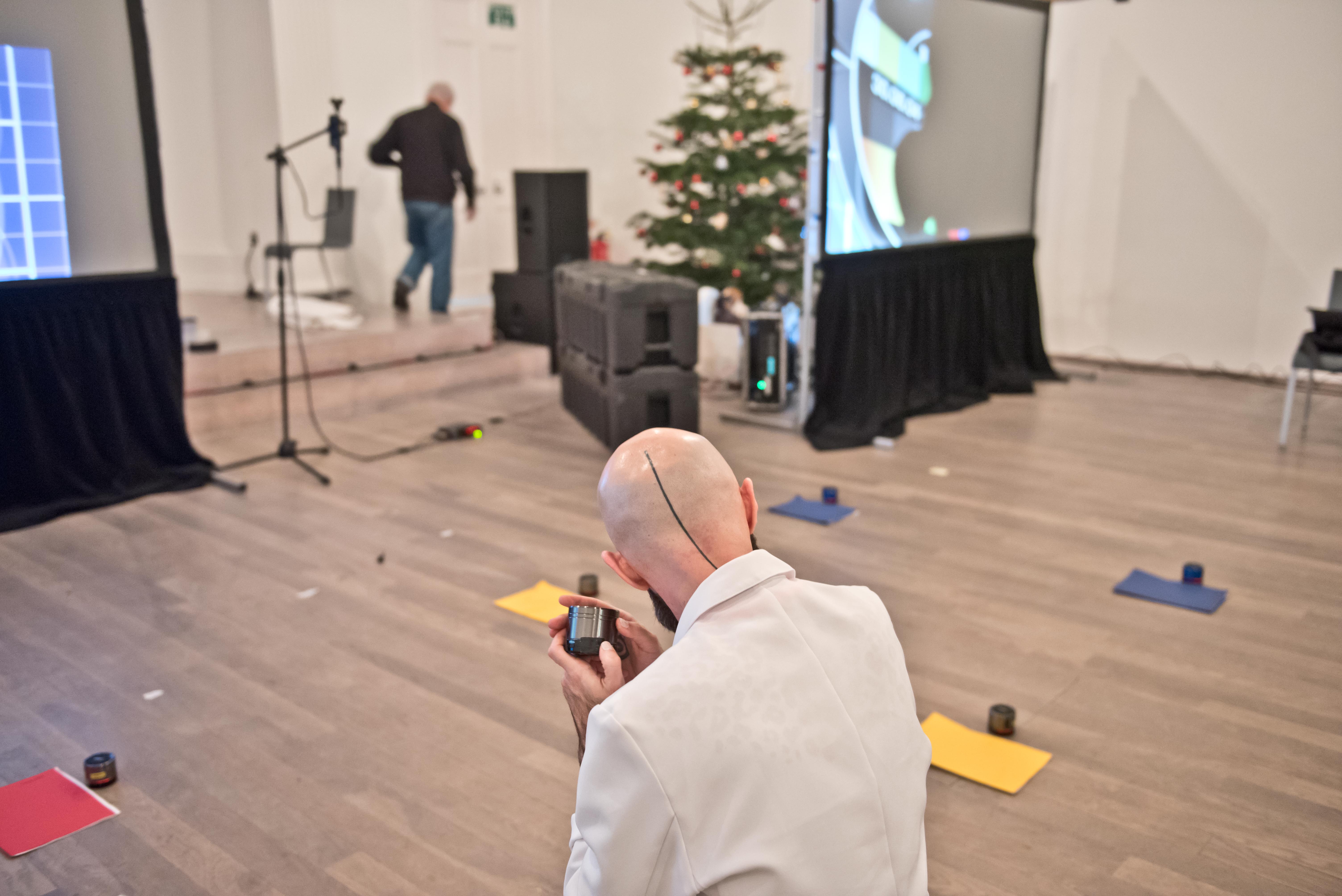 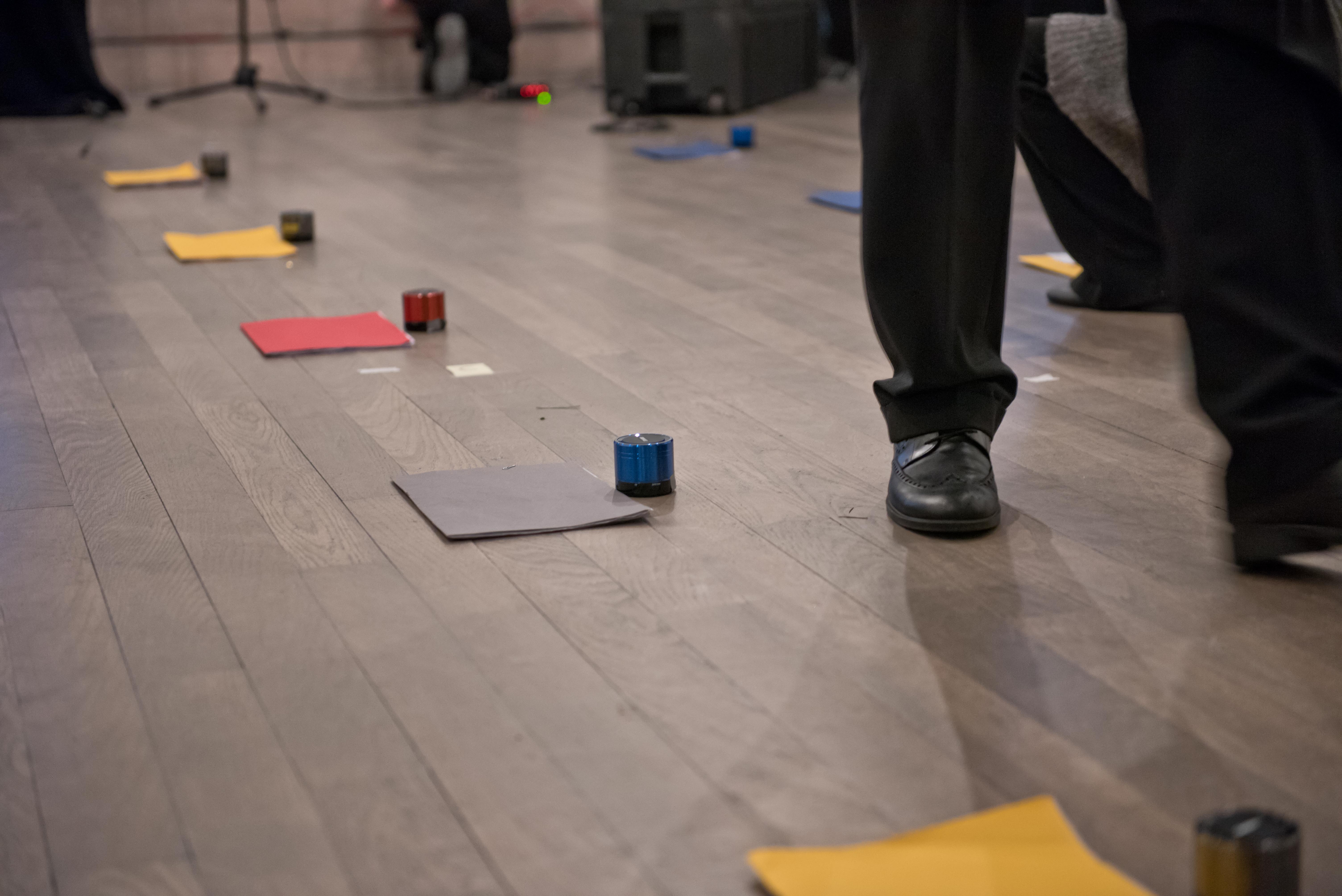 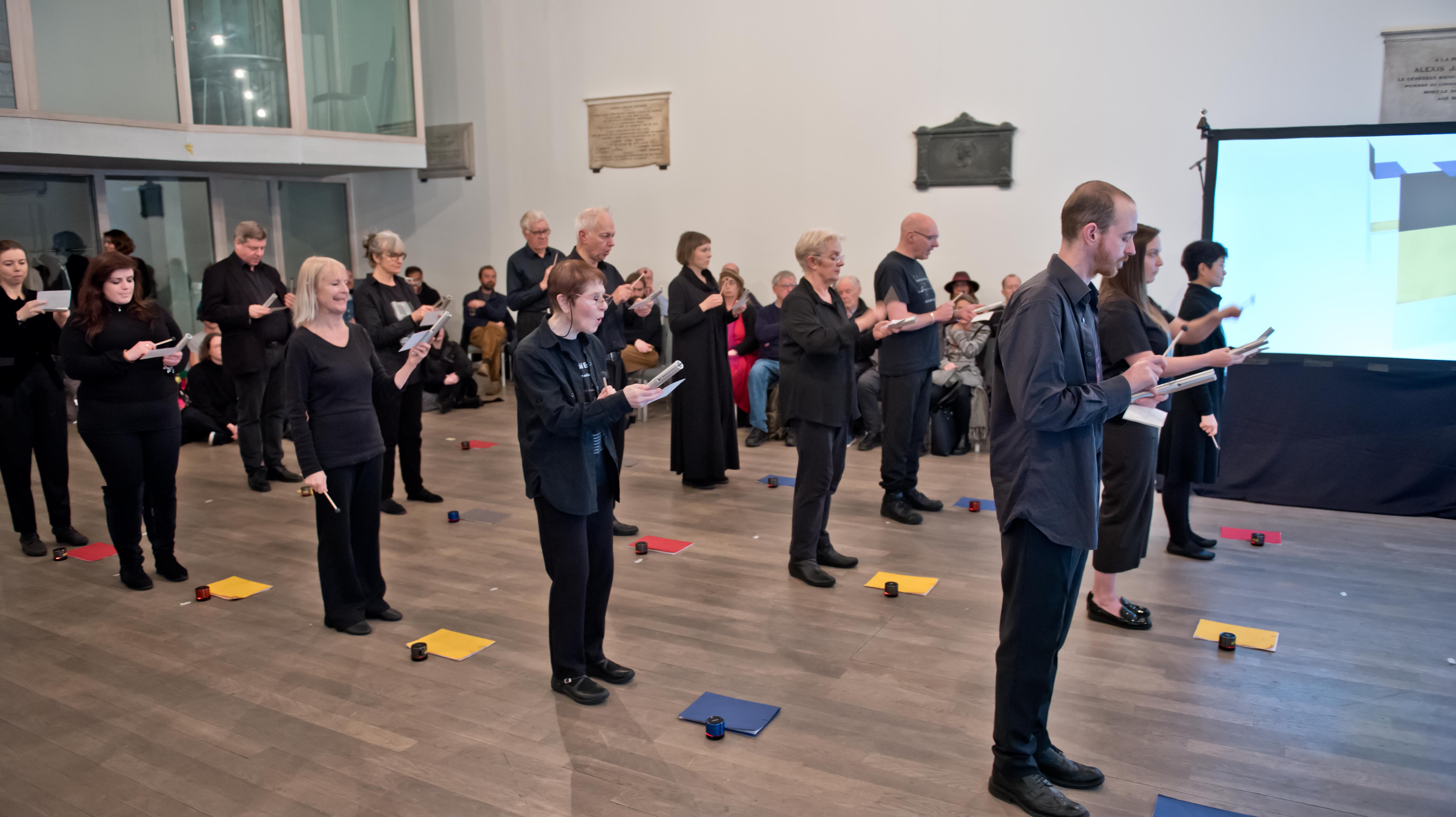 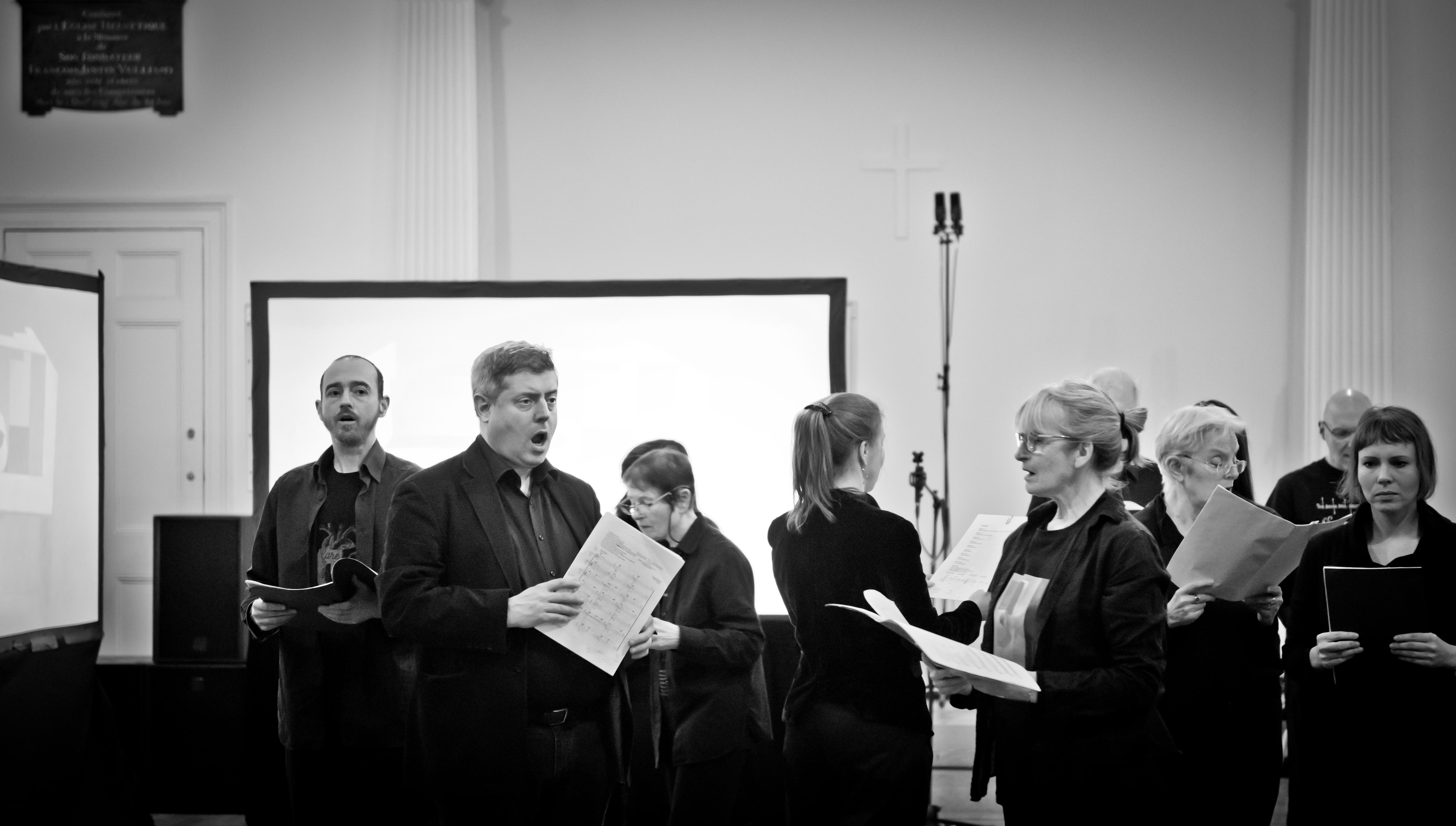